One of the major skills I teach is argumentative writing. One would think that taking naturally argumentative pre-teens and harnessing that energy with be easy, unfortunately it is not. Students that can argue over grades, the pros and cons of wearing leggings at school and which football team will reach the Super Bowl, suddenly have nothing to say when you ask them for argumentative writing.

Document Based Questions are the main way that social studies addresses writing. Unfortunately they have earned a bad name with students and they are not a forgiving group.

They have not had positive experiences with DBQs in the past, but it is my job to build strong analyzing and interpreting skills, as well as argumentative writing skills.

This can be challenging when students already lack the confidence to try and have a hard time envisioning success.

Accountable talk has greatly improved my students confidence in their speaking and writing skills, but they are still nervous about the actual primary and secondary documents. They have always been told “analyze” and “interpret” but what does that actually mean?

To get around his monstrously large hurdle I wanted to think of a fun way to introduce these skills to my students. We would have to try something new! 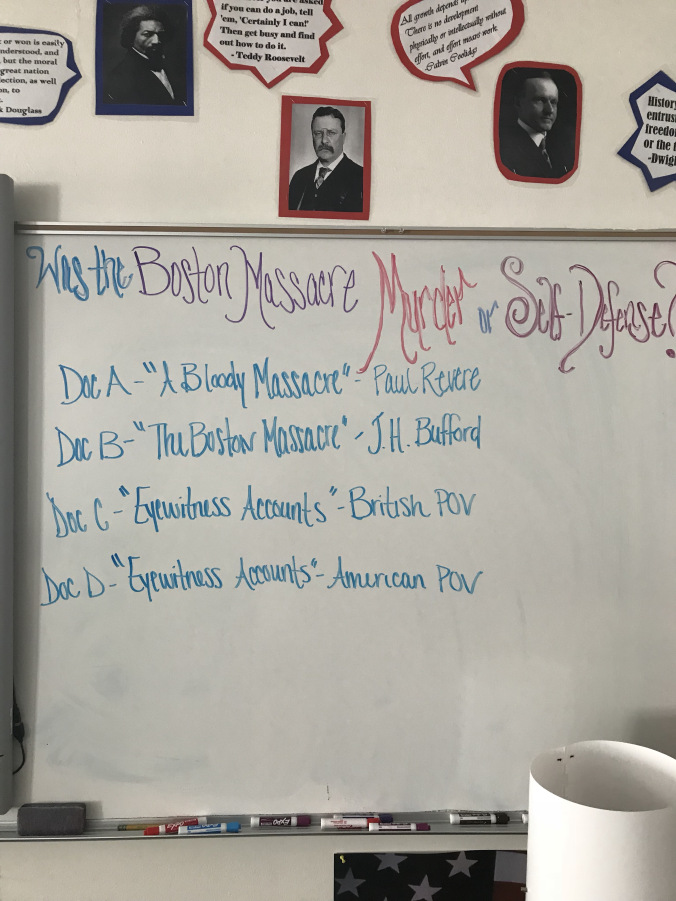 This year instead of just reading about the Boston Massacre I decided that we would stage the trial. Students were asked to either defend the soldiers with a charge of self – defense or prosecute them with a charge of murder. Students would all be given four pieces of evidence.

Task 1:Document A: The Bloody Massacre by Paul Revere 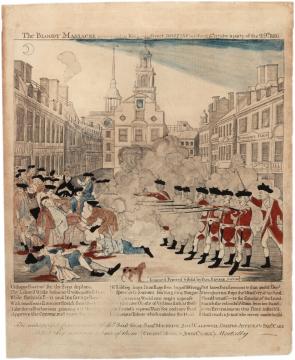 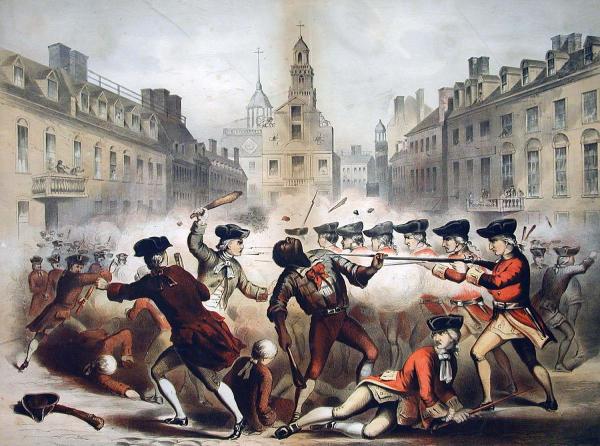 Students have already done background reading from the fantastic series The History of Us by Joy Hakim. We are currently in From Colonies to Country 1735 – 1791.

From their reading students had a solid amount of background information about the event, but now they must analyze and interpret their sources.

The lesson is framed as an actual trial. Each student will be picked to play a part in the Boston Massacre murder trial. They must examine all of the evidence from both points of view because they do not know what role they will eventually play.  To scaffold this learning graphic organizers were created to help guide their anaylsis.

For the engraving and painting students were asked to observe the specific details that made each depiction of the Boston Massacre similar or different. They then were prompted to observe the protagonists and antagonists, perceived bias of the creators and finally create arguments based on the evidence they gathered to support both a murder or self – defense charge.

When students got to the readings they were asked to examine the accounts for the same criteria. What are the similarities, differences, and perceived bias. This time they needed to find direct quotes and then paraphrase them. Finally, they were asked to create arguments for both murder and self – defense using the evidence that they had gathered.

Scaffolding the analyzing and interpreting stage is essential. Students needs to learn semi- independently to build confidence but need the direction ensure that they are building skills.

Students had two days to gather evidence and create arguments for both self – defense and murder.

They then had to prep for trial.

Each class was divided into a prosecution, defense, judges and galley.  We watched a short clip from the John Adams mini series to observe how courtrooms were run in the 1770s. Each group was asked to observe how the actors behaved, what behavior was acceptable and how the case was presented.

For the rest of the period students were asked to work on their opening and closing statements as well as choosing the two best pieces of evidence and argument that would prove their case beyond reasonable doubt.

To say that the kids were excited was an understatement.  The small group discussions were animated, excited and showed not only knowledge or the content but of the skills that I was hoping to teach. They were arguing over which piece of evidence was the strongest, how to improve an argument, what background information was essential for the opening statement and how to create a “mic drop moment” in their closing statement.

I have never seen students so excited about primary documents.

Students were seated in different places around the room depending on their role.

Prosecution and Defense were seated at tables on opposite sides of the room. 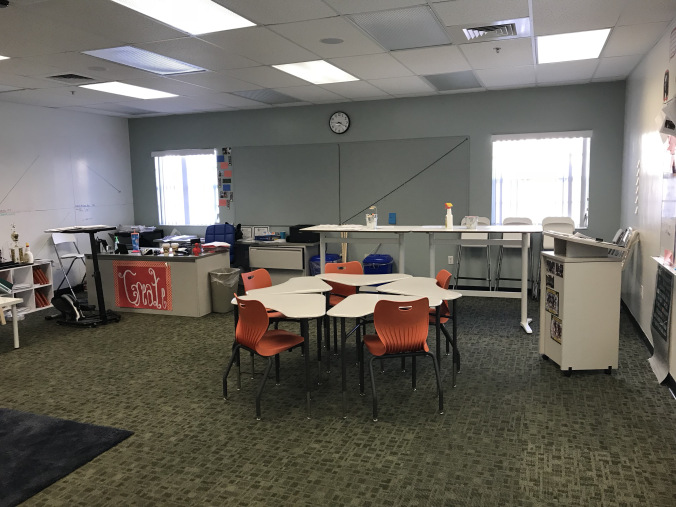 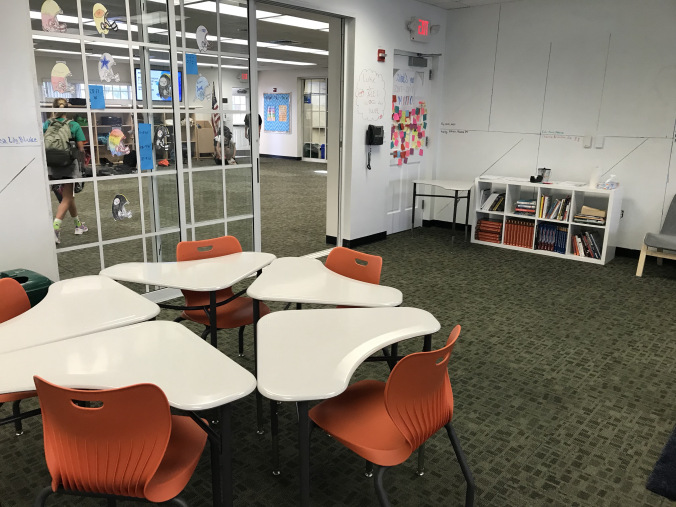 The judges were able to recline in comfortable seating across the front, but within reach of their tables and gavels. 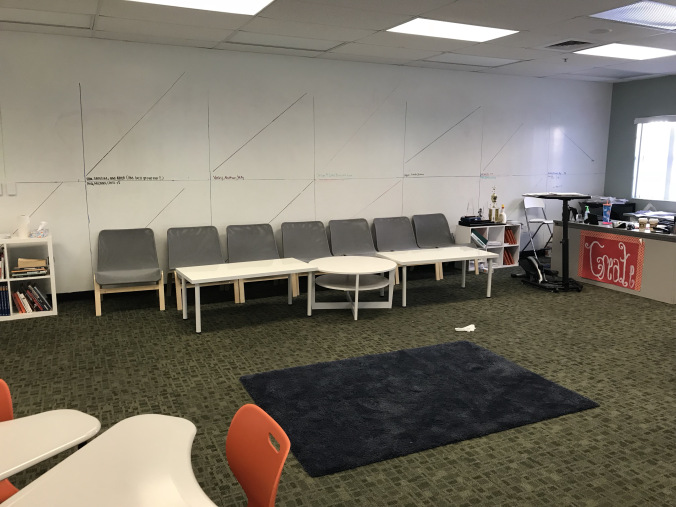 The galley was forced to stand behind my bar height tables.

The prosecution and defense had tough jobs ahead. They not only had to be prepared, but they had to be active listeners to make sure they could cross examine and question weak evidence and arguments.

The judge and galley were tasked with taking active notes to help them keep track of what each side presented as well as a way to justify their verdict. 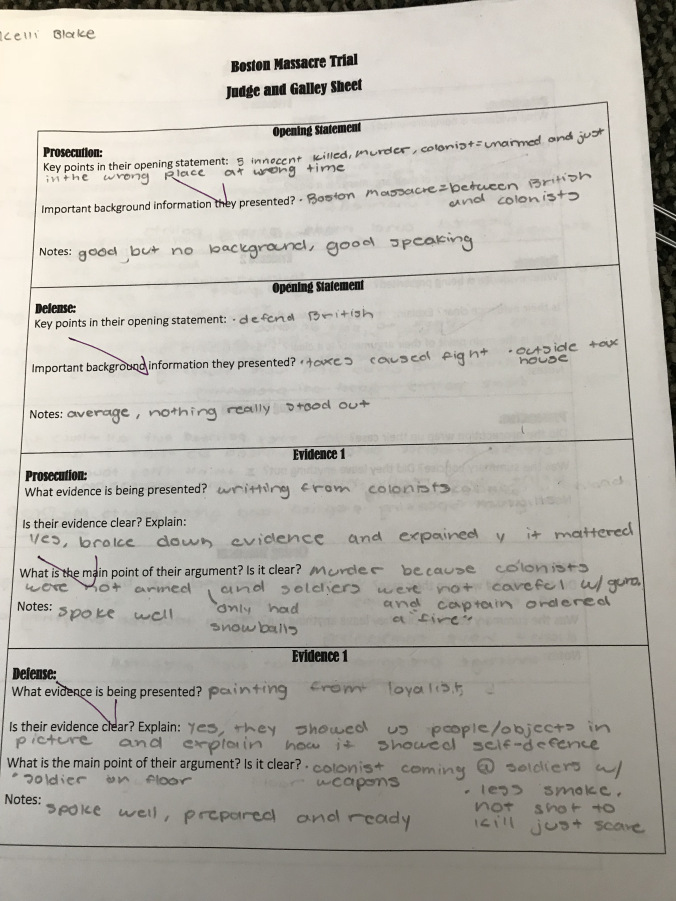 We followed a strict schedule with 2 minutes for opening statements, and introducing new evidence. The other side then had one minute to cross examine before they switched sides.  There were small breaks scheduled in as well so the judges and galley would finish their notes and the prosecution and defense could readjust their arguments.

Students had access to all four documents in print and on the SMART board. Several groups used the smart board to write notes, circle different symbols on the pictures and use visuals to highlight their key points.

The galley was encouraged to be loud and express their feelings which did not need much prompting from most groups.  The judges had to retain order over the galley and the dueling prosecution and defense.

The class period was electric. Students were jumping to their feet declaring arguments too weak to be presented, the galley booed and the judges called everyone to order.

By the end of the period all students seemed exhausted, but each one of them had presented the best evidence and argument they could make.

Out of my five classes 3 declared self defense and two declared murder. The judges and galley had to present their verdict as well as give justification using their notes from the trial for what they chose.

WHAT DOES THIS MEAN FOR OUR DBQ?

Students did not have a write a DBQ following this exercise, but as a wrap up we made the connections to how each part of the trial was like a paragraph in their document based essay.

The opening statement had to grab attention, give background information and present a claim.

Each side had to restate the claim, introduce evidence and then an argument to support the claim.

Finally, in the closing statement the prosecution and defense had to restate the claim, give a summary of their best points and present a “mic drop moment” that would finalize the argument in their audience’s mind.

Now a week later and after grading all of their graphic organizers I can see the growth that this activity provided. Students were forced through the graphic organizers and excitement of the activity to be detail oriented. They not only had to choose evidence, but the BEST evidence. Finally, they had to create strong arguments that would sway their audience.

Having students act out these roles made the argument part of the argumentative essay come to life. They have expressed that they better understand the WHY of a DBQ which makes the writing part of it so much easier.

There will be a DBQ coming up soon and that will be the real test of how beneficial this activity was to their writing ability. No matter the results, the use of time was and experience was amazing for all of us that participated!